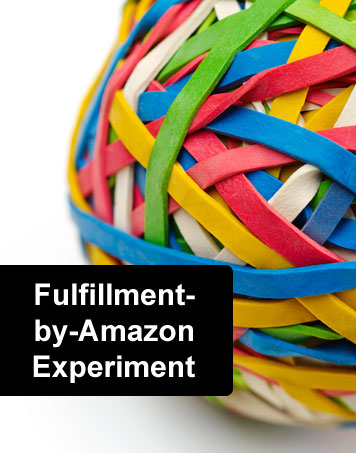 I wrote about my experience trying out Fulfillment by Amazon (FBA) as a seller in parts one, two, and three of the FBA Experiment.

In this post, I’ll tell you about my results and what I thought of the experience. First let’s go into my reasons for giving it a try, since they definitely color my opinion.

I wanted to experiment with retail arbitrage for a couple of reasons. First, I’d bought and resold items at a profit before on a very small scale. (First using — gasp — the newspaper, and later using Craigslist and eBay.) I’d resold airline tickets (back before the days of 9/11), books, random antiques and collectibles, and musical instruments. I enjoy coming across a screaming deal and reselling at a profit. It’s fun.

My husband and I had also been looking for something that we might be able to do together to make extra money. He’s happy to input things into the computer, and probably wouldn’t mind packing stuff up. I enjoy shopping, so thought maybe the combination of things would work out well.

Other considerations and the appeal

I’d never actually bought and resold new items before though, and I’d never even thought about buying and selling on a larger scale because there were just too many things I didn’t like about the notion. Mainly, I hate packing things up and rushing to send stuff off to buyers.

Even with my Etsy shop, I give myself plenty of time to get paintings and photographs shipped out, stating that they are ready to ship in 3-5 business days. The reality is that I normally get my artwork taken to UPS within a day, but I say it may take longer so that I don’t have to feel rushed. When something sells, I just take it in to UPS and pay them to pack it up and ship it. And that’s what appealed to me about Amazon FBA.

Amazon would do a lot of the work, and take care of rushing things to the buyer. I also wouldn’t have to store the items at our house while waiting to find a buyer. (Which reminds me, does anyone want to buy a large card catalog? Yeah, I have a few of those for sale that I would like to at least break even on.) So FBA sounded appealing for that reason.

How I actually felt

Turns out that while I do enjoy lazily browsing stores and getting ideas from the cool things I run across (including how the shops are decorated in many cases), I’m not really such a fan of the kind of bargain hunting that’s required to be a success as an FBA seller.

I enjoy finding a deal, and I especially enjoy finding some undervalued antique at Goodwill, but that’s not nearly the same thing as quickly finding multiples of products you can resell at a profit on a regular basis.

I did OK with at least some of the things I found to sell, and may continue to sell on Amazon on an occasional basis if I happen to run across an awesome deal, but I don’t like shopping that much. Selling on Amazon is not something I see myself eager to do full time by any means.

I like doing creative things a whole lot more, so that’s where I’ll continue to focus my energies. But for a different type of person, Amazon FBA could be a good option. A couple of people commented on part three that they also had experience with it, and their comments sounded positive.

CAN you make money with Amazon FBA?

I would say yes, if you’re willing to put in the work, are careful about what you buy to resell, have quick turnaround, and don’t go into debt to do it.

John of Money Smart Guides commented that he “spent a few hours buying and packing up items and have already sold half of what I bought and am earning over 20% return. It’s a great way to earn some extra income. It does take some work to find good products to get a high return on your money, but when it do, it is totally worth it.”

I’m sure it’s like anything else people do to make money: a bell curve with some people being wildly successful, some failing, and the majority in between.

You can put me closer to the failing side of that bell curve. I spent $180.89 on blinds, reusable grilling sheets, grip liner for drawers, and chalk. So far, I’ve also spent $27.28 on Amazon fees (which include order fees for products and shipping) and $32.43 on FBA fees (which include “non-order fees such as storage of inventory at our fulfillment centers, order removal, and reimbursement and balance adjustments.”)

Basically, buying the products is your initial cost. Then some of the associated fees happen when you ship them the products in for sale, and some happen each time you sell something. If you are professional seller, there are monthly fees but no listing, credit card, or closing fees.

I’ve received one payment so far (of $152.12) and still have 32 items in my inventory. I had a couple of weeks where almost nothing sold, followed by a spate of chalk sales (back to school time, you know), followed by no recent sales. I’m sure there are things I could do to improve my chances of selling things faster, but for now I’m content to wait.

This puts me at a loss of $88.48, but if most of the remaining items sell I will be at a profit. If I were approaching this as a business and not just trying it out, I’d definitely be out there learning a lot more about how to be successful on Amazon, and how to do it better and faster. There’s always a learning curve when you first start a new endeavor, and I never really got out of the very first phase of that.

This will likely be the last of this series, unless I run across someone later who is successful with it and wants to give pointers :) Thanks for following along with the experiment!

Update: Read more about the FBA experiment below