SMART goal examples can show the difference between a goal that’s really just a wish, and a goal that’s going to get you somewhere. SMART goals work because (as the acronym points out) they are: specific, measurable, attainable, realistic, and timely.

Writing out a SMART goal can be very beneficial, because doing so forces you to think about your plans, desires, and motivations in detail. Instead of slapping out a goal that is soon forgotten, you lay a solid foundation that sets you on the path to success.

Before I talk about SMART goal examples though, let’s get a basis for comparison. Typical not-so-smart ones might look something like these:

What’s wrong with those? Let’s take them one by one.

“I want to lose weight” is more of a statement than anything else (or maybe a wish). For starters, it’s very vague. If you lose an ounce, have you achieved what you wanted to do? What about if you lose 20 pounds, but it takes you 20 years? How much is good to lose at once if you want to keep it off? What are you willing to do to make it happen?

“My goal is to get a promotion with a 10% raise this year.” This is getting better. There’s an actual, measurable number in the sentence, and a time frame. But it’s still too vague. What kind of a promotion? Is a year enough time? Also, how realistic is a 10% raise if your company has frozen wages?

Finally, we have “I’m going to start a new business that brings in at least $1000 a month in passive income.” In this case, we know what kind of income we want, but what kind of business are we thinking of starting? Making $1000 a month in passive income is measurable and does sound realistic eventually, but there’s no deadline in the goal. If we’re hoping to do it starting tomorrow, that’s probably not going to happen.

Turn them into SMART goals examples 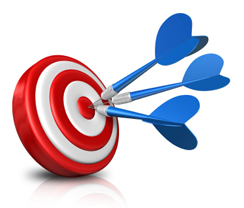 The easiest way to turn a goal (or even something that starts out as a vague wish) into a SMART goal is to ask yourself the same kinds of questions I asked above.

In other words, take your first stab at the goal, and then get critical. Dig deeper until you’ve got it fleshed out.

By answering the questions I asked earlier, we can come up with the following SMART goal examples:

It will take you a lot longer to write a SMART goal, but you’ll also be a whole lot more likely to succeed. Keep in mind that the goal should also be something that causes you to stretch and grow. Something that’s important to you — that you’ll feel good about achieving.

What’s your experience been like with SMART goals? I often have the most trouble with the “realistic” part of the equation…