For years now, one of my goals has been to focus.

I have all kinds of quotes about the power of focus, and I know that you get a whole lot further with something if you can focus on it and make it a priority.

In fact, one of my favorite focus-related quotes is:

“Take up one idea. Make that one idea your life – think of it, dream of it, live on that idea. Let the brain, muscles, nerves, every part of your body, be full of that idea, and just leave every other idea alone. This is the way to success, that is way great spiritual giants are produced.”
~Swami Vivekananda

So I was excited when I saw the link to the Prioritizer that Consciously Frugal had in her post about prioritizing goals.

“Great!” I thought, “Maybe it’ll confirm what feels like the priority to me, if I have to pick one.”

The Prioritizer turned out to be a fickle little thing, only working when I just entered a single word for each goal, but what it eventually spit out was this: 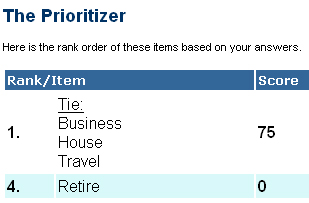 Yup, three out of my four major money-related goals (get my business very profitable, pay off our house, take some expensive trips, and have enough money for retirement) were tied for my #1 priority.

I saw that and laughed, because it’s so typical. I just can’t decide, and you know what, that’s ok. I’ll probably get to all of the goals a little slower, but I’ve been driving myself crazy trying to focus when in fact I am a hummingbird.

It’s time to just go with who I am, and maximize the advantages that brings me. There ARE some, really. Maybe I should stick to one garden as I buzz from flower to flower, but that’s enough of a focus to still make steady progress.

Focusing IS the best way to really make significant progress. When you put all your energy into one thing, you go a whole lot further (and certainly a lot whole lot faster).

But if you’re like me and you’re just not built for focusing long term on a single thing, maybe you’ll join me in implementing some things I read about in Daniel Pink’s book Drive.

FedEx Days are what an Australian company called Atlassian has on occasion. They’re days when their employees can work on whatever they like, but they have to produce the results the next day. (Get it? Overnight.)

20-percent time is similar. Google offers 20-percent time as one of their perks. Their jobs page explains, “We offer our engineers “20-percent time” so that they’re free to work on what they’re really passionate about. Google Suggest, AdSense for Content and Orkut are among the many products of this perk.” So basically 20% of the time, they’re working on whatever strikes their fancy.

Letting your creativity fly like that probably makes the things you’re already doing a whole lot more interesting as well. There’s something about a little inspiration that livens up your life.

Anyone up for being a hummingbird with me? 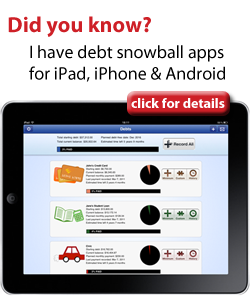